Joe Biden has won the 2020 US presidential election against Donald Trump. For anti-fascists, this is far from a victory. Not only do we know that the incoming Biden regime will only continue the destructive project of the United States, but during this transition period we’ve observed the movement around unsubstantiated claims of a rigged election giving space to reinvigorated white nationalist and fascist voices. In Northern California, this has manifested in weekly far-right rallies at the Capitol in Sacramento fueling an angry mob of Proud Boys and militia members sweeping the streets to attack those they identify as “enemies.” 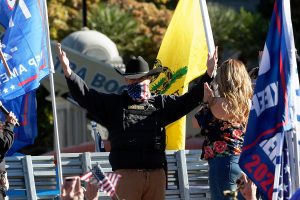 Christopher Young has been front and center at many of the far-right rallies and events in Northern California since early this summer. Operating under the online pseudonym “Odin,” (his dog’s name) or “Odin Young,” he has affiliated himself with several far-right populist and supremacist groups including the California State Militia and the Central Valley Militia. Young is the Vice President of the Central Valley Proud Boys and has a Proud Boys tattoo on his right forearm. Young told J. On November 28 that he is a former Muslim and now Christian. However, several of Young’s tattoos signal a relationship to Pagan religion and culture as does the name he gave to his pet (Odin). Every single video on Young’s TikTok account is also centered around this theme. (For more details on the overlap between certain Pagan groups and fascism, see Antifa Sac’s previous work) 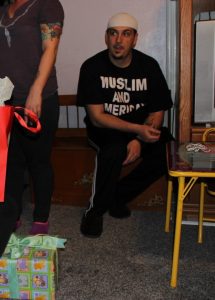 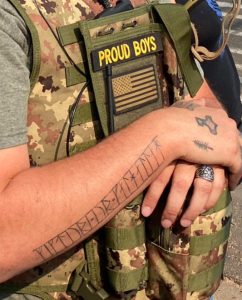 Some of Christopher Young’s tattoos

Young’s social media posts divulge much of his point of view and political positions. Young is skeptically optimistic about Donald Trump. He’s shown support for the now-outgoing president over the last four years, yet he also countered that support in a November 2020 post on Telegram. In an offshoot Proud Boys discussion channel, Young speculated that Donald Trump is “a puppet for ZOG and doesn’t even know it.” The acronym ZOG stands for “Zionist Occupational Government” and is a staple in modern white supremacist discourse that dates back to the 1970s. The term refers to the anti-Semetic conspiracy theory that the United States government is actually controlled and operated exclusively in the interests of Jews. A more popular (and only slightly less anti-Semitic) version of this conspiracy is the “New World Order.” These theories allow the far-right to explain why the United States isn’t run the way they think it should be, and also validates their feelings of victimhood by providing them a scapegoat for their anger. In an October 2020 interview that Young did with podcaster Allen Hall, Young opined that from here on out he doesn’t see any way for there to be peace between liberals and conservatives. 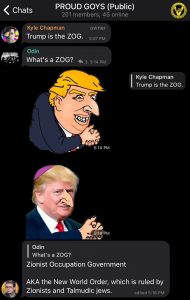 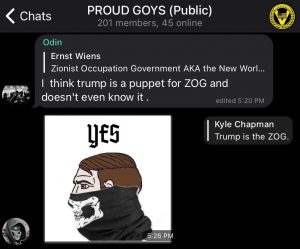 Additional Telegram posts further detail Young’s views on race. In one message, Young’s anti-black racism came through when he described himself as “98% white boyyyyyyyyy” and expressed a preference for being “1% jew” over being “1% african.” Young adheres to a National Socialist-style (Nazi) understanding of the world, believing that races should be separated from each other and he believes this is the natural order of things. What Young shares in private discussions like these is much different from what he said to Allen Hall about inclusiveness and diversity in their public podcast discussion. It’s clear that Christopher Young is motivated to action by a far-right line of thinking that concludes that white men are somehow the victims of a grand conspiracy to oppress them, and furthermore that there is now or will soon be a civil war in the United States against the “ZOG”/“NWO.” 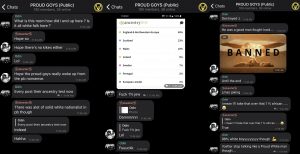 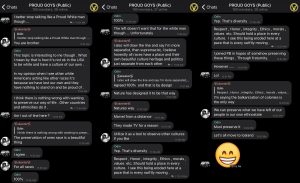 Christopher Young has been a presence at right wing events in the Sacramento and Central Valley area as far back as 2019, often wearing Proud Boys and pro-Trump clothing. Posting as “Odin Young” in a local Facebook group earlier this summer, Christopher Young announced that he was going to form a “Galt militia” and invited others to become members. This post was archived and shared with the Galt city council by several concerned residents. Later in August, Young participated in a “Straight Pride” rally in Modesto, CA organized by Don Grundmann. Far-right content producer Josh Fulfer attended the rally wearing a shirt that had a picture of Kyle Rittenhouse on it with the words “American Hero” underneath. Kyle Rittenhouse is the 17 year old who shot and killed two Black Lives Matter (BLM) protesters in Kenosha, WI and maimed a third. Pictures of Christopher Young and Josh Fulfer together at the event show Young clearly pointing attention towards and agreeing with the message Fulfer was promoting on his shirt. 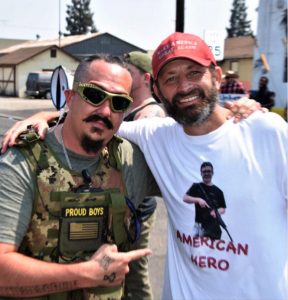 Young appeared again at a far-right gathering in Atwater on September 26 that included militia groups, Proud Boys, and a wider conservative contingent that came together to show support for police in opposition to the BLM movement. Pictures from this event capture Young fraternizing with militia members, one of whom was holding a riot shield with the words “Free Kyle Rittenhouse” on it next to a Proud Boys logo. This marks multiple times Christopher Young has been comfortable supporting the teenage murderer. 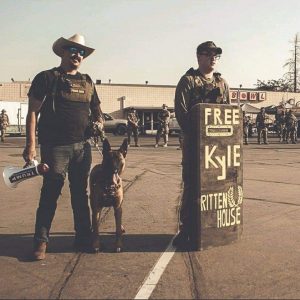 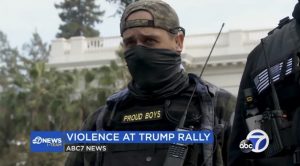 Most recently, Christopher Young has been a key figure in the weekly right wing rallies taking place in Sacramento. Activated by a completely unfounded conspiracy theory of widespread voter fraud that is supposedly responsible for Joe Biden’s victory over Donald Trump in the 2020 election, the far-right has been gathering every Saturday at the Capitol building including Proud Boys, militia members, and white supremacists along with radicalized MAGA die-hards, anti-vaxxers, and Q anon followers. All of these rallies have thus far erupted in violence and far-right bullies attacking the unhoused, minors, and random pedestrians. On November 14, Young was photographed holding the same “Free Kyle Rittenhouse” riot shield seen in Atwater in September. Young has taken a lead organizer role providing coordination at these events and was even given space to speak to the crowd at the November 21 rally from the bed of his truck. After vaguely alluding to a “very serious” event coming in the future during his speech, Young declared that, “We will certainly stand tall until we have victory or paradise.” Standing with him in the back of Young’s truck was Proud Boy Jeffrey Perrine, known for shouting that “illegal immigrants should have their heads smashed into the concrete” at a far-right rally in Portland in 2018. Joining Christopher Young and Jeffrey Perrine was Alicia Peterson, a MAGA organizer who is known to have worked with the Golden State Skinheads in her activism. 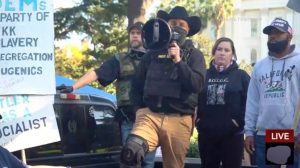 On November 28, Christopher Young joined the rest of the Central Valley Proud Boys on stage as they all sang a song together called “By God We’ll Have Our Home Again,” a song written by a fascist white supremacist project called Mannerbund. The song was originally featured in the handful of podcasts on the Mannerbund website, which also includes articles and imagery explicitly venerating National Socialism (Nazism). One comment from a Mannerbund participant on their website mentions that “several brothers” have connections to the fascist group Patriot Front. Following the National Socialist sing-along and an afternoon of drinking, Young and dozens of his fellow Proud Boys roamed the streets around the Capitol and Cesar Chavez Park looking for people to fight. Throughout Fresno Proud Boy Eddie Block’s livestream of the event he hastily identified random people as “antifa infiltrators” with intentions of making them targets of violence. Block’s frenzied paranoid thinking proved faulty when one of his targets turned out to be the wife of another Proud Boy. The potential for Proud Boys to indiscriminately bring harm and terror to random people shouldn’t be underestimated.
Christopher Young is an active threat. Due to his affinity for National Socialist (Nazi) ideas regarding race and culture and his affiliations with violent Proud Boys and militia members, anti-racists and anti-fascists should continue to monitor Young and his associates. There is still a lot of room for further research into the militia movement in Northern California. It should be noted that Young does indeed own firearms. 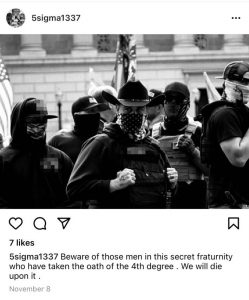 An example of the way Christopher Young obscures his membership in the Proud Boys on Instagram. Note: “4th degree” refers to the Proud Boys who have engaged in violence with “enemies”

You can usually spot Young at an event with his hair tied back, wearing a cowboy hat and some combination of gear and clothing with Proud Boys insignia. The black truck that he drives has stickers supporting the Proud Boys and the III% militia movement on the back windows. Young alters photographs of himself and others that he posts on his personal Instagram account so that the Proud Boys logos in the photos are unrecognizable. This and Young’s use of the pseudonym “Odin” hint that he wants to limit his public association with his far-right activism.
Legal Name: Christopher Carl Young
Pseudonym: “Odin Young”
Born: 1983 (37 years old)
Address: 36 Almo Ct Galt, CA 95632 (Sacramento County)
Vehicle: Black Ford F150, CA license plate 27101A1
Occupation: truck driver
Affiliations: Central Valley Proud Boys, Sacramento Proud Boys, California State Militia (2nd Infantry Regiment, Echo Company), Central Valley Militia, III% militia
This article was a collaboration between Northern California Anti-Racist Action (NoCARA) and Antifa Sacramento. If you have any information on Proud Boys, militias, and other far-right organizing in Northern California, you can anonymously send tips to NoCARA at nocara@riseup.net and to Antifa Sacramento at antifasac@riseup.net