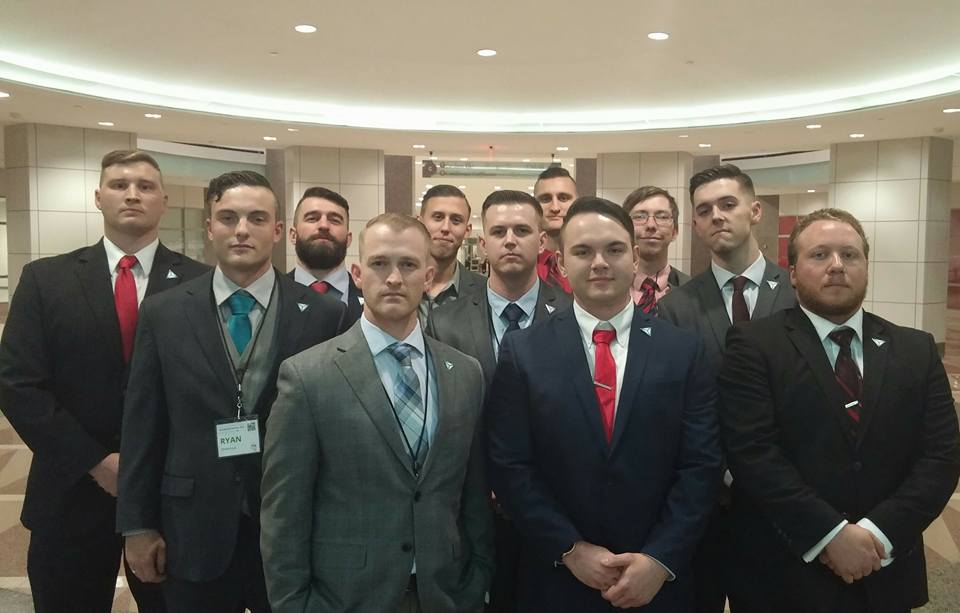 Andrew Ferguson and Kilian Glish, 1st and 3rd from left. Two members of the fascist and white supremacist group, Identity Evropa, and former members of the DKE frat in Michigan. Shawn Mccaffrey is pictured 2nd from the front right, and is another Michigan resident. 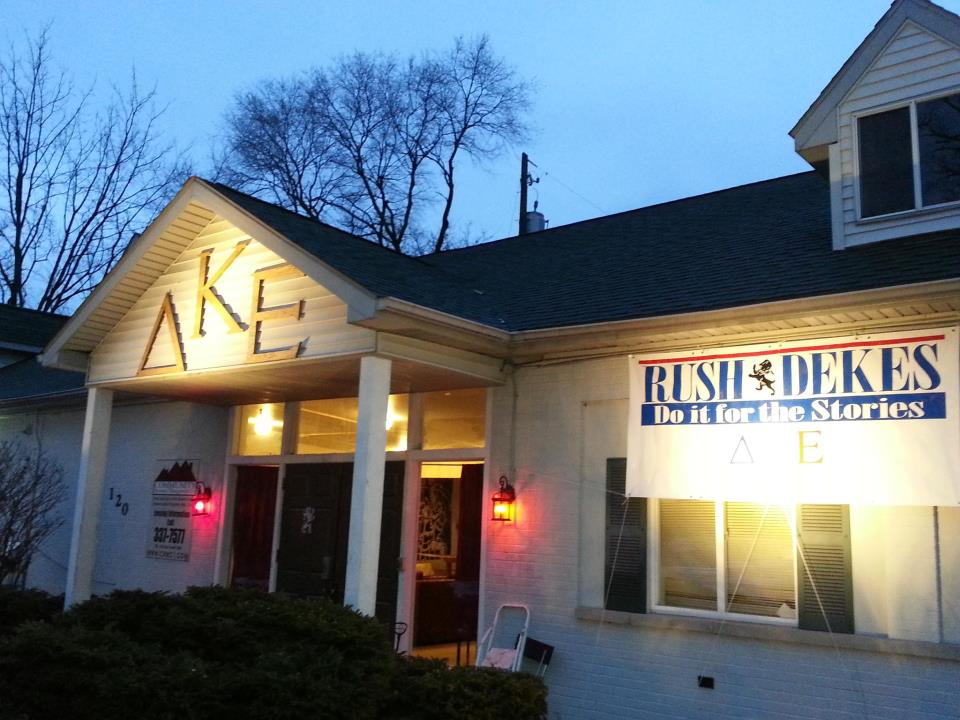 A building for DKE in Michigan. The fraternity included members who are part of Identity Evropa, some even serving in leadership positions. 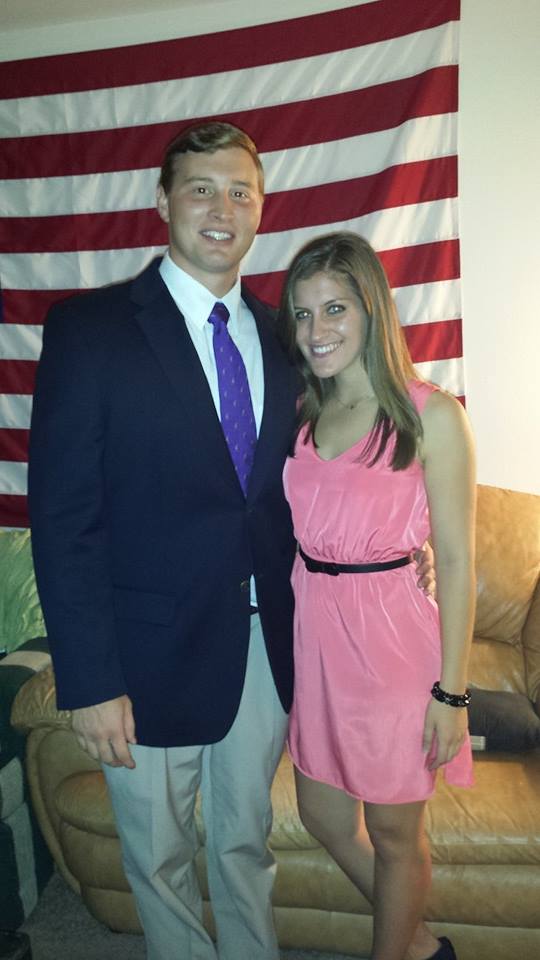 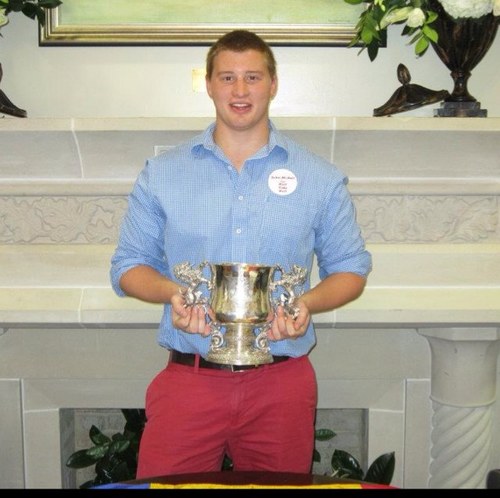 Andrew Ferguson is an IE member based out of Michigan. Ferguson is a MSU grad and was Vice President of the DKE frat (Delta Kappa Epsilon), which Kilian Glish (another IE member, see below) was also a member of, and served as Treasurer. Ferguson and Glish attended NPI’s November 2016 conference together.  Both are featured in the IE group photo from the conference with Ferguson on the far left and Glish standing next to him (with beard). 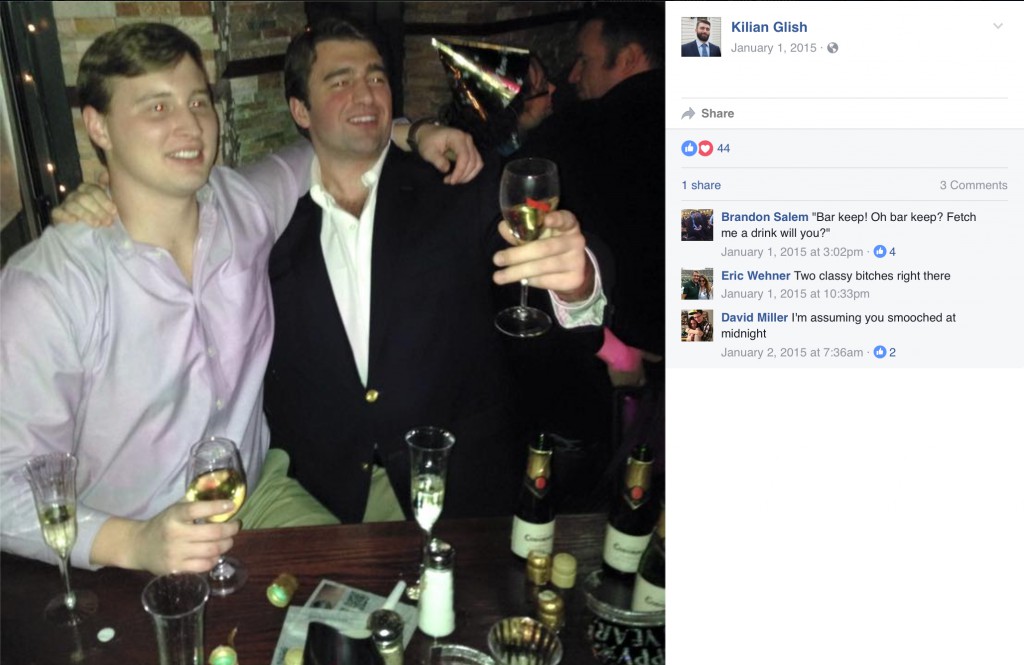 Andrew and Kilian showing a lot of concern for the working class white people that are fetching their drinks.

Andrew Ferguson (left) and Kilian Glish (right) at a DKE gathering. Can you smell the bourgie?

Kilian Glish graduated from Michigan State University in 2014. During Glish’s time at the university he majored in economics, played on the rugby team, and even became the treasurer of Delta Kappa Epsilon. During his final summer ahead of his senior year, Glish studied abroad in Germany where he got to practice his German and immerse himself in the culture. Looks like he was about 70 years too late.

Surprisingly, Glish has a profile posted at The Professional Diversity Network, a network aimed at “Connecting Diverse Professionals to Employers That Value Diversity.”

According to Glish’s Linkedin profile, he currently works for Collaborative Advantage Marketing located at 2021 Hazel St Birmingham, MI 48009.  The phone number is (248) 723-0793 and you can find their website here: http://www.camtrade.com.  More information on CAM can be found here: https://www.linkedin.com/company/3073495. If Collaborative Advantage Marketing is one of those employers that values diversity, they might like to know that a white supremacist is working for them.

Delta Kappa Epsilon MSU photo with a familiar symbol; the same logo as Identity Evropa. Appears to be some sort of pin. 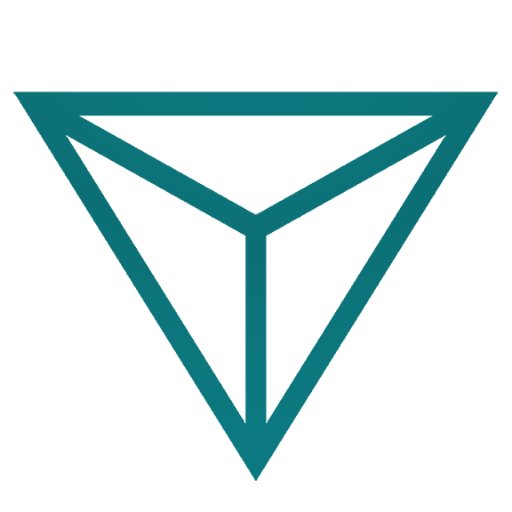 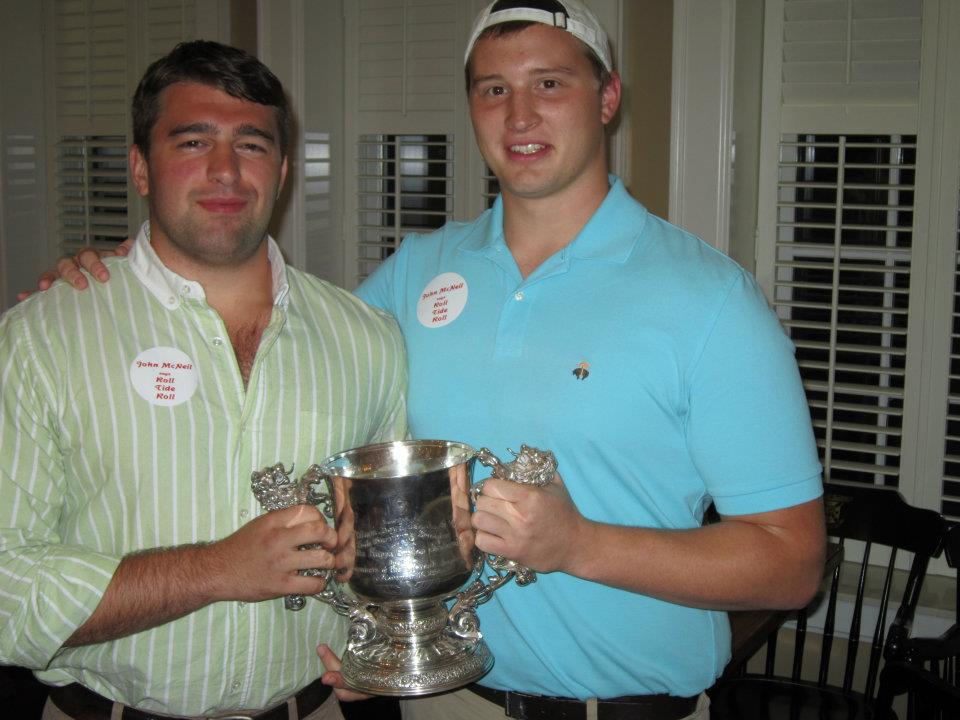 Ferguson and Glish with “Lion’s Cup” from DKE facebook page, 2012.

Do you think Shawn realizes how dumb he actually looks in this picture, or it’s just all of us?

Shawn, 24, seems to be in the inner circle of the inner circle within Identity Evropa, and he has appeared at both the recent NPI Conference, the IE rally in San Francisco, and was seen in photos with William Clark, Damigo, and Lucas Huston in joking discussing ‘retaking Constantinople.’

Voter records place someone with his name at: 8361 Dickert St Commerce Township, MI. 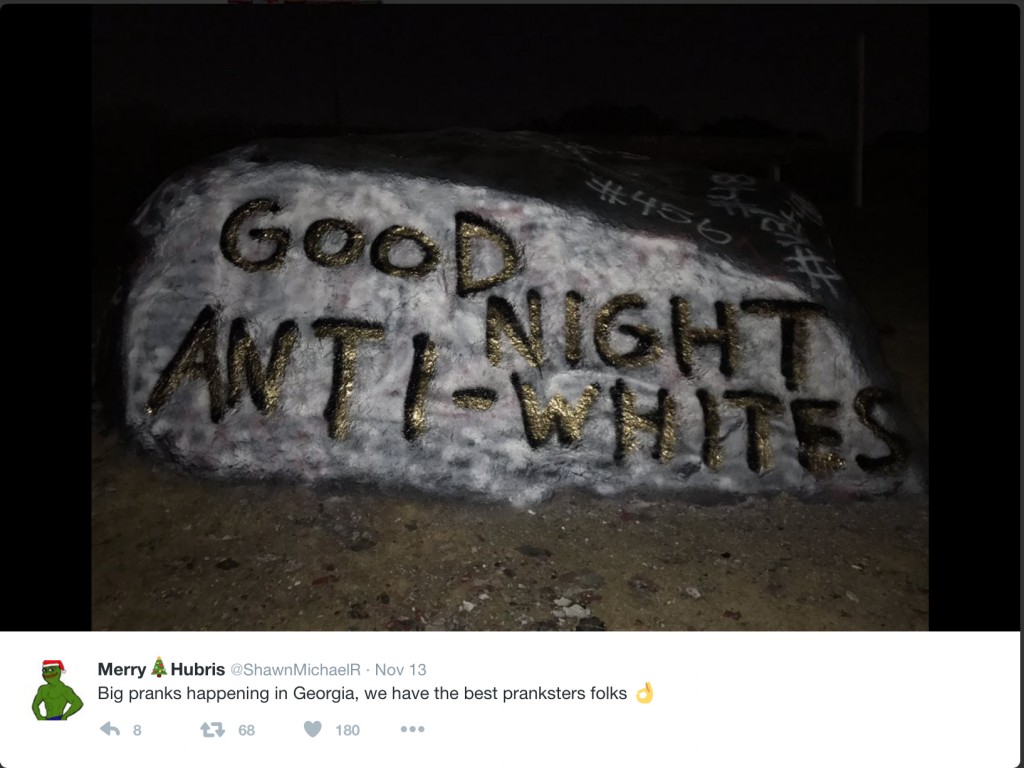 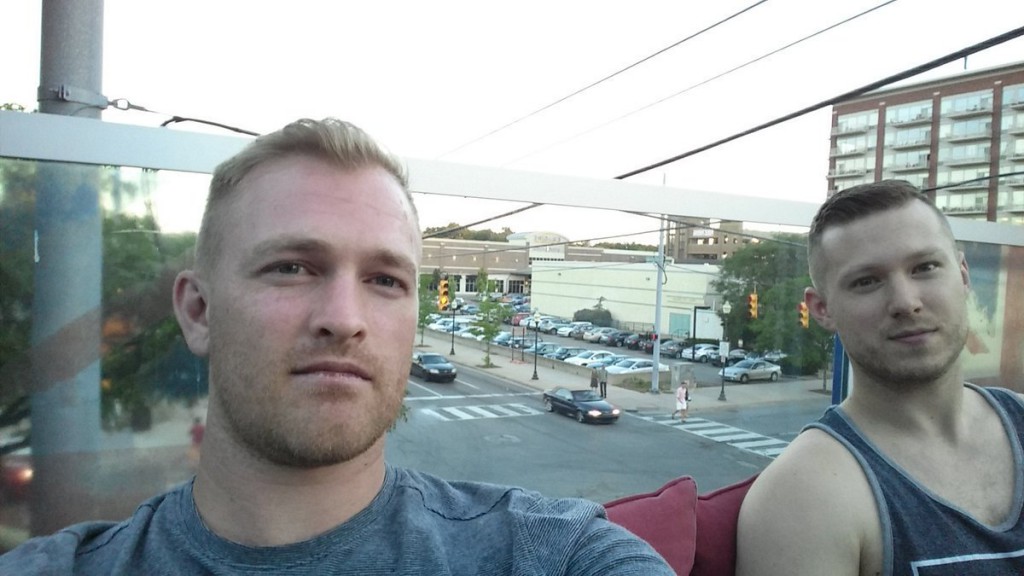 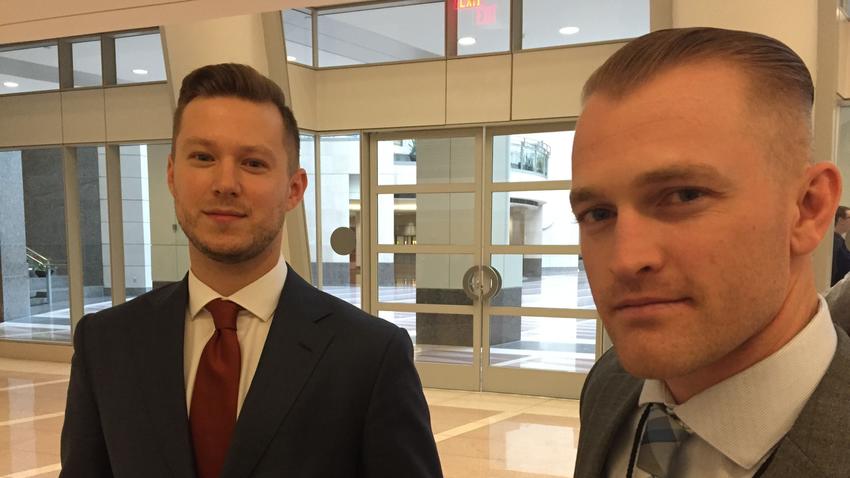 Thomas and Damigo at the National Policy Institute conference November 19, 2016

Evan Thomas centered his activity around organizing state-wide conferences from about 2006-2009, inviting speakers such as Jared Taylor to his events. His experience must have come in handy, as Nathan Damigo captioned the above photo of him and Thomas at the last NPI conference in November 2016 with “Identity Evropa volunteers coordinating the conference.” Thomas is active in the so-called identitarian movement and has done reporting on these movements in Europe.

Also a graduate of MSU where he studied international relations, Kyle Bristow is now an attorney in Michigan and Ohio where he runs the Foundation for the Marketplace of Ideas. Under the Foundation for the Marketplace of Ideas, Bristow organizes alt-right conferences, defends alt-right activists, and seeks to reverse civil rights gains by revisiting Supreme Court judgements. Bristow defended Matthew Heimbach after he assaulted a black woman at a Trump rally in early 2016. According to the Southern Poverty Law Center:

“[R]epresenting Heimbach will be Kyle Bristow, a soft-spoken but viciously opinionated racist activist, a recently minted lawyer who entered the movement while an undergraduate at Michigan State University. Like Heimbach, Bristow in the last couple of years has become one of the white supremacist movement’s most visible young activists — and he is doing his best to become even more so.”

The Southern Poverty Law Center has a detailed report on Bristow here: https://www.splcenter.org/hatewatch/2016/10/05/law-and-disorder-movement-lawyer-kyle-bristow-takes-larger-role 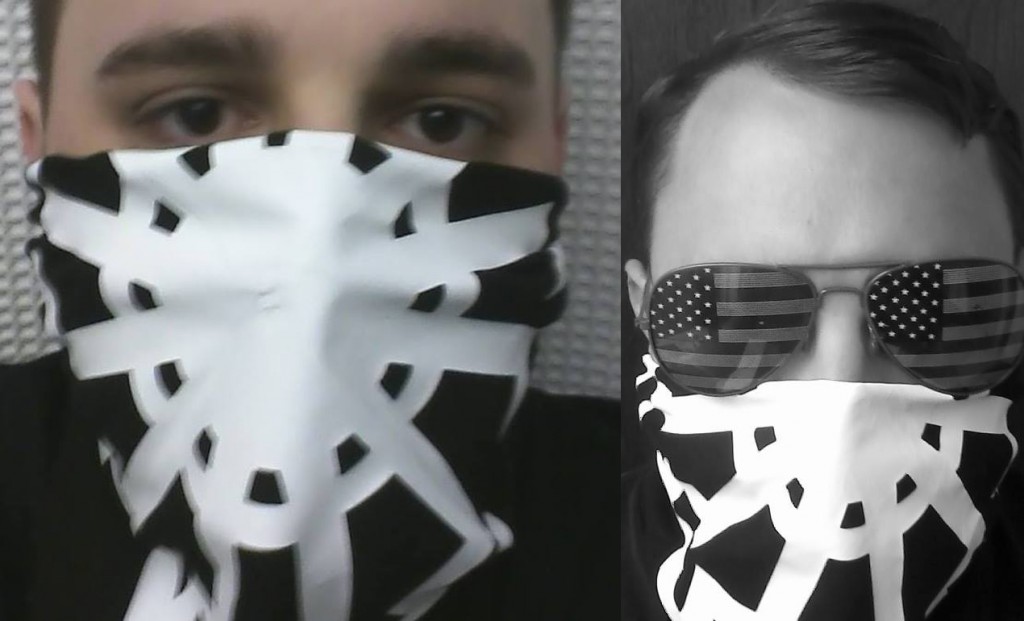 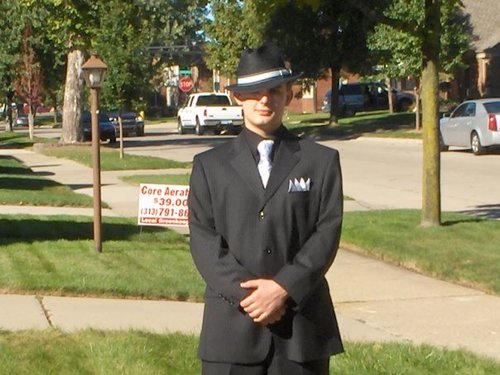 Iron Mitten is the name of a group that some of these alt-right fascists are participating in to spread their message on local university campuses. 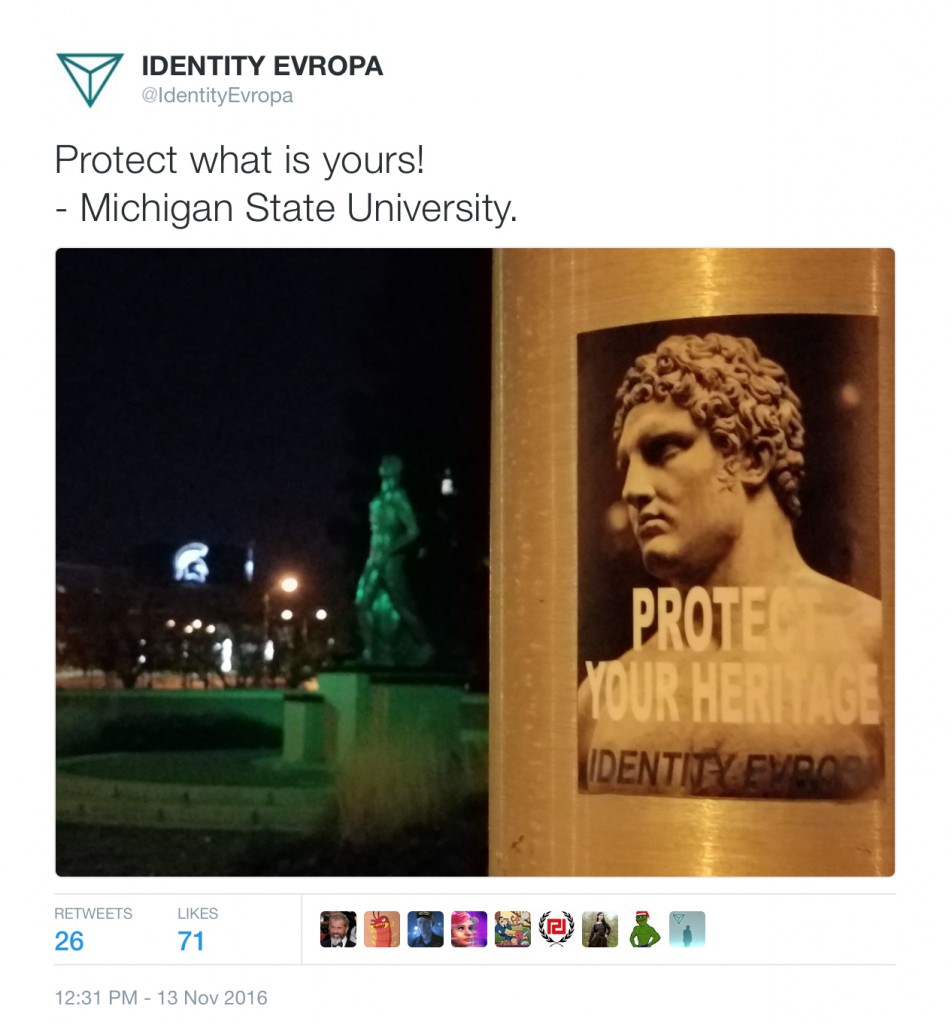 Michigan appears to be a major site of activity for Identity Evropa and the greater alt-right, with propaganda appearing around both the Michigan State University and the University of Michigan campuses. They appear to be well networked into institutions that only the wealthy and powerful have access to, however these are organizations who’s image can be shattered with this information.

Flyers such as this one can be distributed at places like MSU and UM to spread the word about Identity Evropa and what they’re about.