As mainstream media coverage of the anti-fascist struggle has skyrocketed over the last year, we’ve noticed that questions surrounding it have largely been confined to concern over a narrowly defined free speech. This has been accompanied by numerous, sometimes deliberate, misrepresentations. While narratives of violence have tended to be over-represented in accounts of anti-fascist and anti-racist organizing, reporting on the alt-right has been the opposite, downplaying the violence inherent to the recently re-energized white nationalist movement. Because clashes in Northern California between anti-fascists and white supremacists have captured so much media attention over the last year, we feel it necessary to place these incidents within their proper context.

Despite the fact that California is widely seen as a bastion of liberalism and tolerance, the state is in fact home to more active hate groups than any other in the country. FBI numbers indicate that reported hate crimes in California increased 11.2% from 2015 to 2016. The East Bay Express noted that Northern California cities consistently rank high on the FBI’s list, with San Leandro and Berkeley seeing a particularly notable spike during 2016. This has prompted UC Berkeley’s student paper, the Daily Californian, to join ProPublica’s Documenting Hate project in recording local incidents in Berkeley. Acts of racist vandalism were reported in the East Bay throughout 2017, and acts of anti-Semitism occurred in Alameda and public schools throughout the greater Bay Area. Similar evidence of growing far-right hatred and violence has been observed throughout the Central Valley. This mirrors patterns observed by the Southern Poverty Law Center (SPLC), which recorded a surge of hate crimes across the United States following the election of Donald Trump in November 2016. According to the SPLC, alt-right killings began in California and 2017 has been the deadliest year yet for far-right violence. One violent neo-Nazi organization, the Atomwaffen Division, has been connected to several murders over the last year, including in California. This group has been shown to have a presence in Northern California specifically. Atomwaffen Division is inspired by James Mason’s book “Siege,” which is distributed by Counter-Currents, a white nationalist publisher based in San Francisco.

Below is a partial account of far-right and white supremacist activity that occurred throughout Northern California from 2016 to 2017. The mainstream media has tended to focus their reporting on more “spectacular” occurrences like clashes at rallies and university speaking events, but as we can see from the list below, the breadth of far-right action is much wider, ranging from flyering and recruitment campaigns to attacks and even brutal murder. When reflecting on these incidents, though this list is by no means complete, it becomes clear that university speaking tours and “free speech” rallies are only the tip of the iceberg. They exist within the larger context of a growing white supremacist movement, and are but a few of the many tactics that these groups employ. Researcher Spencer Sunshine similarly analyzed the far-right mobilization throughout the country in 2017 at Political Research Associates. 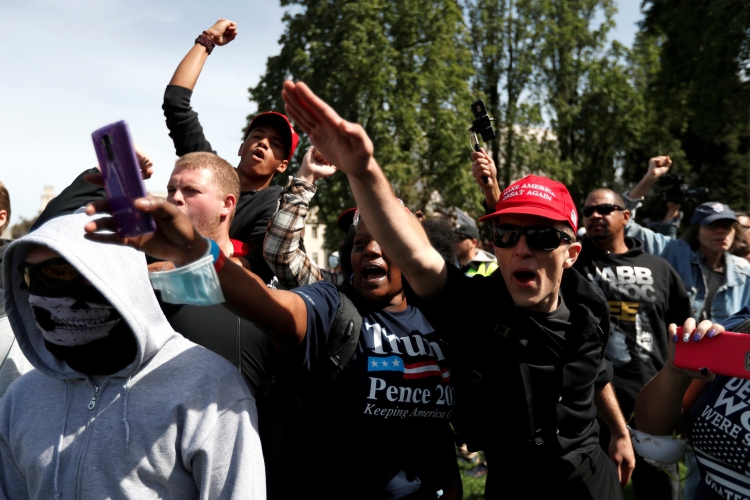 Despite the growing threat of white supremacy and fascism, anti-racists and anti-fascists have kept up the fight and countered with organizing of their own. Groups patrolled their neighborhoods and campuses to remove hateful stickers, posters, and banner drops, replacing them with anti-fascist messages. Book fairs, community forums, and conferences like ROAR facilitated anti-fascist organizing and brought people together to share research, strategies, and history. Fundraising and benefit events strengthened solidarity and provided material support. Self-defense and bystander intervention trainings coupled with rapid response workshops enabled mass community defense against violent attacks. Research was done on local far-right groups and organizers, as well as those who enable them to recruit and push their politics into the mainstream. Call-in campaigns and boycotts targeted workplaces, bars and venues that supported fascists and their organizing efforts. Exposés on active alt-right organizers and aggressors were published, disrupting their activity and aiding local communities with knowledge of threats in their areas. John Ramondetta, Daniel Quillinan, and Cole White were all exposed to Berkeley residents as white supremacists, leading to Ramondetta moving out of his house and having trouble at work, while White lost his job entirely. Far-right street presence was also persistently confronted. Multitudes of people throughout Northern California showed up to counter rallies, marches, and speeches again and again. Many stepped up to do critical support work, providing dedicated hospital support, street medic care, court support and anti-repression work for those who faced charges or were wounded in the fight against fascism.

None of this activity relied on state sanction or protection. Instead, the most effective community self-defense came in the form of autonomous organizing across tendencies with a respect for differing strategies and tactics. Indeed, the state sees this kind of anti-fascist organizing as even more threatening than that of white supremacists. MuckRock analyzed reports showing that Homeland Security in Northern California has been more concerned with surveilling anti-fascists than neo-Nazis. Moreover, their intelligence takes for granted photoshopped alt-right propaganda and conspiracy theories as fact. Police in both Sacramento and Berkeley have actively aided far-right aggression against local communities. More often than not, the state’s strategy has been to protect white supremacists and increase repression against anti-fascists. Berkeley PD has been given more authority and weapons to contain protests, and Berkeley mayor Jesse Arreguin expressed that he thinks antifa should be classified as a gang. In Sacramento, police recommended hundreds of charges for anti-fascists after neo-Nazis stabbed protesters at their 2016 rally. 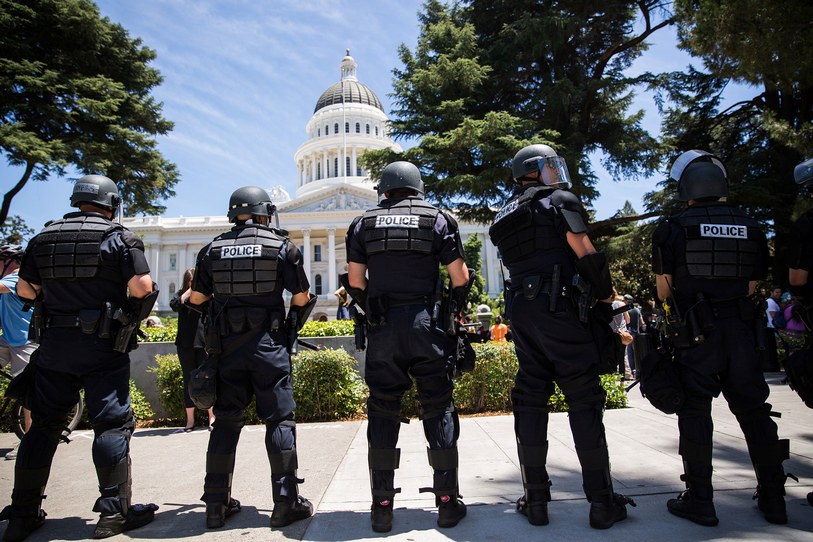 Police equipped with riot gear and body cameras during the June 26th neo-Nazi rally in Sacramento. Officers stood back during the brawl and later attempted to block street medics from treating stabbing victims. Tear gas and tasers were deployed against anti-fascists, while neo-Nazis were provided protection and police escorts.

This points to the contradiction between how fascist aggressions are handled by the state compared with the anti-fascist response to these aggressions. On one hand, far-right attacks are reported to police, whose statistics and data are referenced in reports of increased trends of white supremacist violence. On the other hand, it is clear that police are more interested in targeting and surveilling anti-fascists, all while they themselves continue to murder hundreds of people in the United States every year while bringing yet more into the ever-increasing racist mass incarceration system. The state’s response to anti-fascist organizing is just one more way in which it upholds white supremacy. If we are to organize against the threat of the alt-right effectively, it will be in spite of state interference, not because of it. This further establishes the need for autonomous community defense and response.

Looking back on the wave of white supremacist terror and violence that characterized 2016 and 2017, it is clear that we as anti-racists and anti-fascists must enter 2018 fighting harder than ever. Fascism may be on the rise, but so are we. The state cannot and will not protect us from this growing white supremacist threat, but if there’s one thing we’ve learned in the past two years, it’s that we have the tools we need to continue combating fascism and keep building the support networks necessary to keep each other safe. In the months and years to come, we will turn to each other and face the future with resolve to keep organizing, growing, and disrupting fascism wherever it arises. 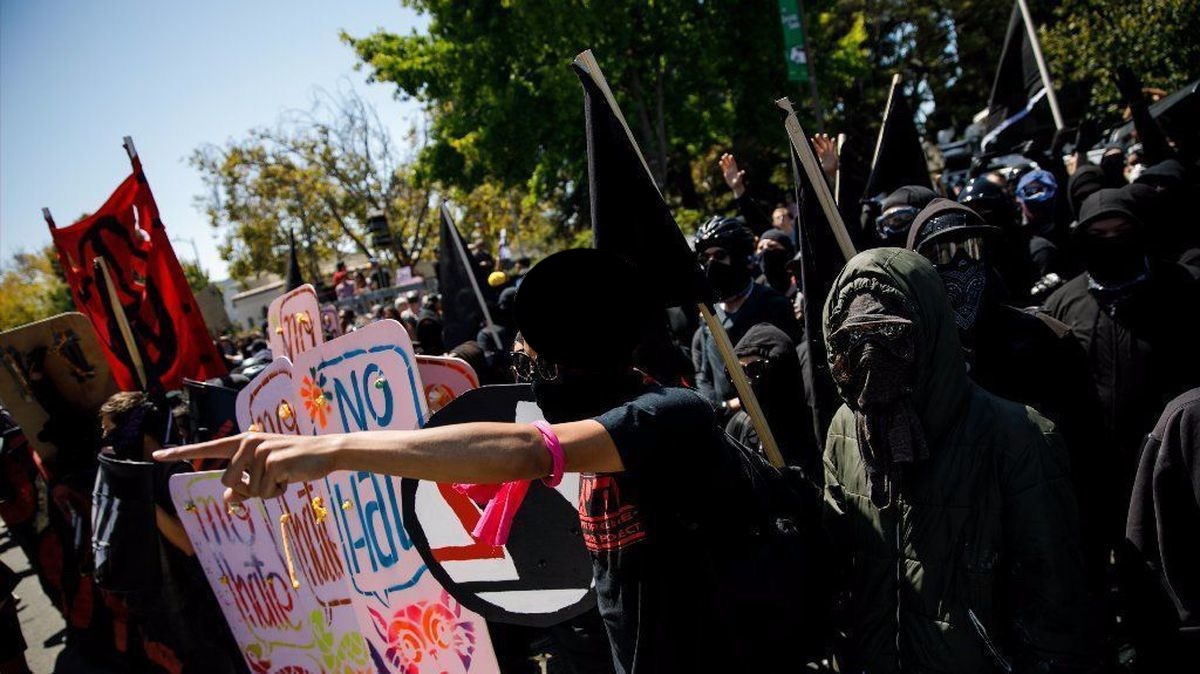 Anti-fascist demonstrators at the August 27th mobilization in Berkeley.

Did we miss something? Email us!

Report hate crimes and fascist organizing efforts to us at NoCARA@riseup.net