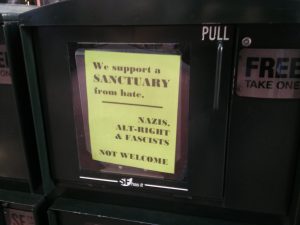 Flyer up in San Francisco on December 16

On Saturday December 16, right wing activists organized two separate but coinciding events after Jose Inez Garcia Zarate was acquitted for the accidental death of Kate Steinle in San Francisco in 2015. Though Garcia Zarate was convicted of being a felon in possession of a firearm, a jury found him not guilty of murder, involuntary manslaughter, and assault with a deadly weapon. In response, various factions on the right gathered in San Francisco to protest sanctuary city policies and to hold a vigil for Kate Steinle, disregarding the Steinle family’s wishes for Kate’s death and the verdict to not be further politicized. 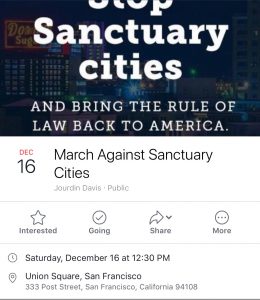 Trump referenced Kate Steinle’s death during his campaign and the issue was revisited with the conclusion of Garcia Zarate’s trial. Following the verdict, Jourdin Davis called for a rally against sanctuary cities in San Francisco’s Union Square. The rally was to end with a vigil for Steinle at Pier 14, organized by Lindsay Grathwohl. These events saw a revival of sorts of the broader coalition between mainstream Trump supporters and more far right, white nationalist groups, though it was clear the overall turnout and energy was deflated in comparison to events earlier in the year such as Berkeley on April 15. Counter protests organized by the Left brought together anti-racists, immigration activists, and anti-fascists and ended up outnumbering those on the right despite being organized in a relatively short amount of time. 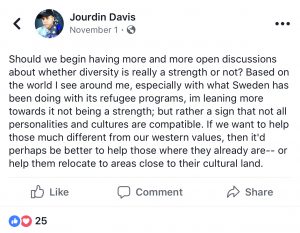 Jourdin Davis’s pro-border wall, anti-sanctuary event got off to a rocky start. After creating a Facebook event to organize, Davis faced an overwhelming amount of pressure online and he cancelled the rally soon after. However, this first Facebook event page showed the potential for the return of the big tent-style organizing that occurred on the right for their “free speech” rallies. Known local white supremacists and fascists announced their intention to attend. In particular, Christopher Locke of Sacramento, who has a history of violence, indicated he would arrive to the rally armed. This was welcomed by Jourdin Davis. 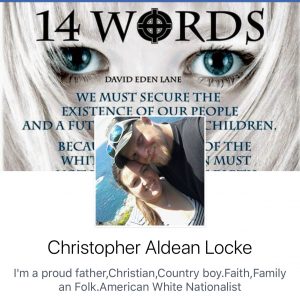 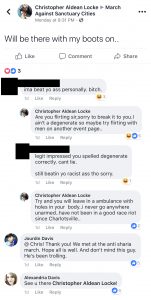 Lindsay Grathwohl decided to host a vigil for Kate Steinle after Davis cancelled his event. Eventually, Davis made a second event page on Facebook announcing that his rally was back on and would happen in tandem with Grathwohl’s vigil. Right wing activists gathered in Union Square before marching to Pier 14 where Steinle was accidentally shot. The politics being expressed were dominated by both implicit and explicit racist anti-immigrant sentiments. They were confronted by a larger rally of Leftists, which followed and heckled the racists, making it known they weren’t welcome in the Bay Area.

Just like most other right wing events in the Bay Area throughout 2017, December 16th showed that Trump supporters don’t care who they organize with- even if they are white supremacists and Neo-Nazis. This reveals a degree of desperation on the part of Trump supporters who repeatedly cheer on a president that has stabbed his base in the back and continues to lose what little support he once had. Among the far-right groups in attendance at the rally against sanctuary cities were the Proud Boys and Identity Evropa, including individuals who had previously brought violence to cities such as Berkeley and Charlottesville. 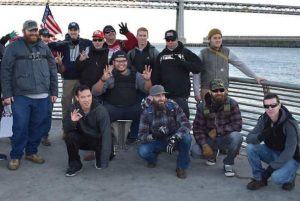 It’s ironic that Trump supporters claiming to honor Kate Steinle would be comfortable with the presence of the Neo-Nazis in Identity Evropa. Kate Steinle’s family asked the city of San Francisco to remove the memorial that Identity Evropa set up for her on the night of Garcia Zarate’s acquittal because they were uncomfortable with receiving support from white supremacists. This is not the first time Identity Evropa has acted in response to Steinle’s death. In October 2016, the group held a dismal 20 minute rally at Pier 14 before getting scared of anti-fascist mobilization and running away. The rally on December 16 shows how Trump supporters help to give cover to fascists and facilitate their organizing by creating events and providing the far-right with space to recruit and spread their own talking points.

Patrick Little accompanied Identity Evropa members at this rally. Dressed in a suit and carrying a US flag, Little was observed by local reporters shouting and giving an anti-Semitic rant. Little is an ex-marine running for Senate in 2018 and has been banned from Twitter due to his anti-Semitic tweets. One Identity Evropa member who attended previous rallies in the Bay Area as well as Unite the Right in Charlottesville was also at this event, marching alongside the organizer Will Johnson and speaking with Ashton Whitty, former member of the Berkeley College Republicans. 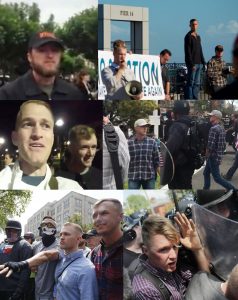 Ultimately, December 16 appears to be an attempt to use the acquittal of Garcia Zarate as one last gasp for breath for a movement that has had trouble maintaining a presence in the streets, especially after Charlottesville. While it did draw together a broader coalition than the past few efforts on the Right, the energy and number of attendees was low. Moreover, it doesn’t appear that this cause has the potential to inspire sustained activity, and the Right has mostly moved on from this issue. Going forward, anti-fascists should continue to be aware of the ways that elements of the alt-right insert themselves into more mainstream conservative spaces, and find strategies and tactics that break those links in order to prevent the further mainstreaming of fascist politics and organizing.

If you have any information regarding the white supremacists discussed above or any other white nationalist groups in Northern California, please get in touch with us at nocara@riseup.net