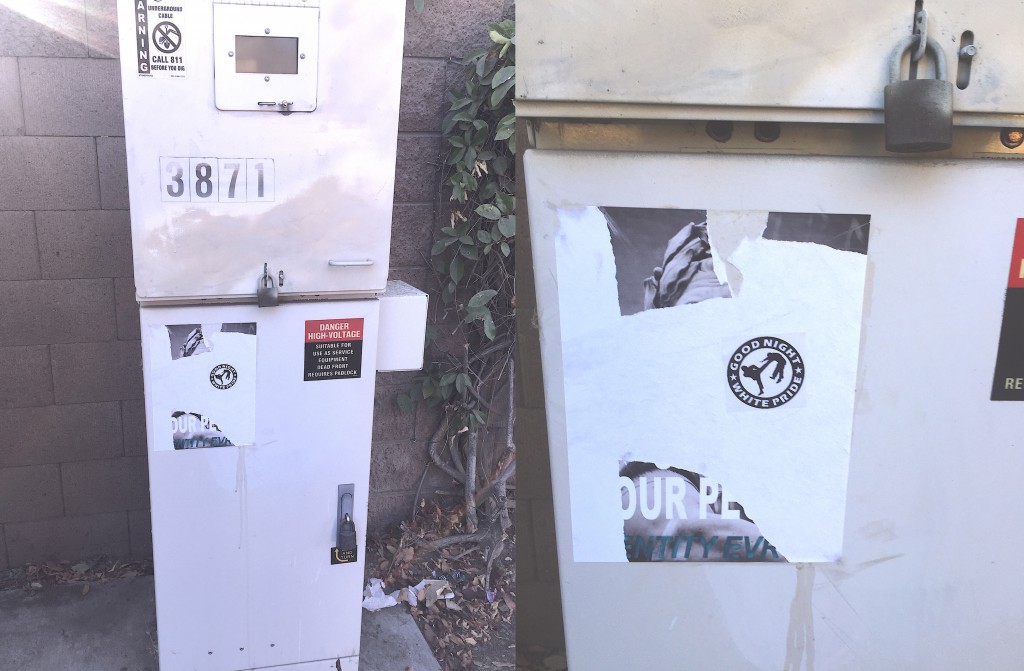 Recently, the president of CSU Sacramento called up the president of CSU Stanislaus, a campus located in the Central Valley town of Turlock, CA. The CSU Sacramento president, Dr. Robert S. Nelsen, was concerned and angry after discovering that a white supremacist group, Identity Evropa (IE), had pasted up a series of posters promoting themselves around the campus. Wanting to know more, Nelsen did a quick search and found that its creator was Nathan Benjamin Damigo, a man who had done 5 years in prison after carrying out a violent hate crime against a working-class Muslim cab driver. Nelsen did a database search thinking that perhaps Damigo was a local student, only to find that he was a senior not at CSU Sacramento, but at CSU Stanislaus. As it turned out, faculty at CSU Stanislaus were aware of Damigo and Identity Evropa’s presence in Turlock long before that phone call was made. When members of NoCARA spoke with faculty members while canvassing, they learned that the campus staff are well aware of the situation and know that it is Damigo putting up stickers and posters around the campus.

While Damigo has been majoring in Social Studies at CSU Stanislaus, he’s also been busy building up one of the fastest growing white supremacist groups in the US. About a week ago, Identity Evropa (IE) launched their latest campaign, “Project Siege,” which focuses on recruitment and plastering college campuses with propaganda. The imagery on Identity Evropa’s official propaganda is left intentionally obscure (closeups of greek statues, short, open-ended taglines, and the green, three-sided prism logo are some of their chosen staples), reading more as ‘generic skateboard company’ or ‘bad vaporwave band’ than ‘extremist hate group’. However, their disarming appearance does not change the fact that they are promoting and actively campaigning for the creation of an all-white, fascist, authoritarian political power.

Indeed, Damigo is interested in building a fascist movement, not just in popularizing images for online consumption through twitter. For instance, earlier this year Damigo and his circle of Neo-Nazis, white nationalists, and Trump supporters held a rally at UC Berkeley that was live-streamed by Red Ice Radio, an extremist, anti-Semitic media outlet. Damigo has worked on and off with Red Ice Radio in recent months. He reported for them at the RNC with fellow white supremacist Richard Spencer, and spoke with them at the American Renaissance conference, a gathering that presents fascist and racist ideas as ‘scientific’ and ‘biological’. All of this signals the beginnings of a new fascist movement- one that incorporates many different groups, seeks to ride the coattails of the Trump campaign, and has the potential to build something much more lasting and destructive.

Towards this end, Damigo has put a lot of work in building up Identity Evropa through putting up posters and stickers, most recently through his promotion of “Project Siege”, IE’s latest campaign. In a video published on September 27th, Damigo encouraged viewers to put up their own flyers and posters around college campuses as part of the project. “For those of you guys who want to take part, you don’t necessarily have to be a member of our organization,” Nathan urged. “We would actually invite everyone to do this; to get out to these students just what they’re not being told.”

Since the beginning, Identity Evropa has put out an excessive amount of information on social media advertising their postering exploits in various cities, which has resulted in most propaganda being quickly torn down by the public and by anti-fascists who monitor IE’s social media accounts. CSU Stanislaus, however, has only ever been mentioned by Damigo in his personal bios and in passing on a podcast with Red Ice Radio. Identity Evropa stickers and posters were found throughout the campus, but were never mentioned in the official Twitter or Facebook. The question then becomes, why has Damigo been so uncharacteristically quite about his activity on the campus?

There are several factors: First, we believe that in addition to attending CSU Stanislaus, Nathan Damigo lives in the nearby town of Oakdale, about 40 minutes north-east of Turlock. Identity Evropa’s P.O. Box is listed as being located at the Oakdale Post Office. Secondly, CSU Stanislaus is a notably diverse campus – only 26% of the student body is white. Damigo isn’t just hiding in plain site around individuals who are willing to look the other way, he is purposely avoiding drawing attention to himself in his local area because he knows it would be risky. When it comes down to it, Damigo has not publicized the Identity Evropa posters and stickers that he put up around CSU Stanislaus for one simple reason. He doesn’t want to shit where he eats.

This Tuesday, the sewage backed up right into Damigo’s toilet, and the shit got everywhere. Anti-fascists answered the call for #ProjectSiege in the form of 300 posters that went up at CSU Stanislaus. The posters detailed Damigo’s hidden past as a convicted felon in a violent hate crime, as well as his involvement in a string of hate groups before attempting to rebrand himself with Identity Evropa. After all, the students have a right to know what they’re not being told, and true to the tradition of suit-and-tie campus fascists, Damigo has an ugly side that he isn’t advertising for the world to see. 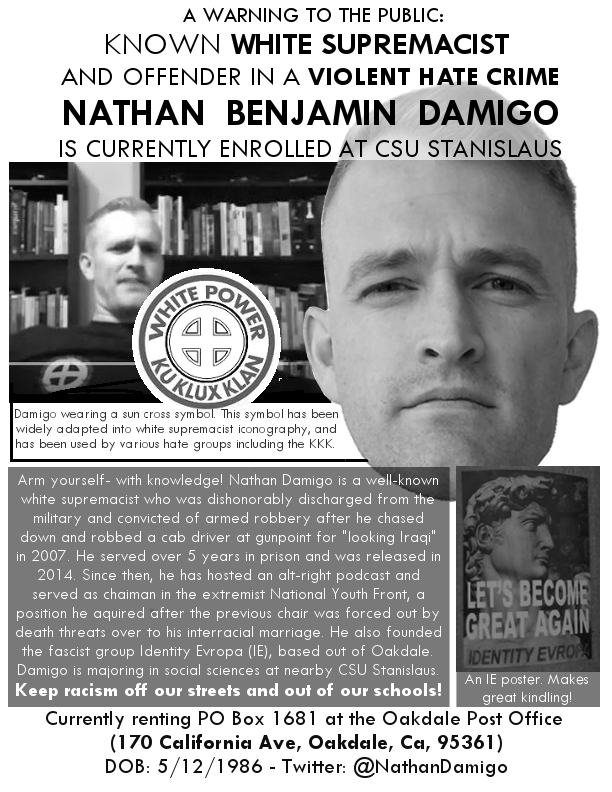 The posters littered the campus, covering community cork-boards and the shredded remains of Identity Evropa propaganda. They also appeared outside of the post office that houses IE’s P.O. box. One thing is clear: “Project Siege” is in full swing, and it isn’t the Alt Right who’s doing the sieging!

We call on all Anti-Fascists to join us in the fight against Nathan Damigo and Identity Evropa’s #ProjectSiege. Here’s a list of things that you can do to take action:

Contact CSU Stanislaus and voice your displeasure with Damigo and the Identity Evropa scandal. Flood the Social Studies Department with calls and emails- you can organize a call-in night with friends, take 5 minutes by yourself on your lunch break, and get the word out to others about calling in. Putting pressure on the university is one of the many valuable tools in our toolbox, and one of the easiest to do from just about anywhere. Demand answers about the school’s allowance of white supremacist propaganda and their lack of intervention despite knowing the culprit’s identity. Stress that students have a right to know that a Neo-Nazi with a violent history is attending classes on the campus, and that Identity Evropa is openly organizing for a fascist and authoritarian white supremacist movement. If you live in an area where Identity Evropa has put up posters and stickers, explain how angry you are and tell them that this has to stop!

Take Down IE Propaganda in Your Area

Monitor the Identity Evropa Twitter account here and the Facebook here. IE loves advertising exactly what they’re up to, so finding out if they’ve postered near you shouldn’t be a challenge. They target high-density areas and college campuses in particular- if you see any Identity Evropa propaganda, tear it down and replace it with Anti-Fascist stickers and posters. You can post action pictures to sites like itsgoingdown.org.

Print out this informational flyer about Nathan Damigo of Identity Evropa and educate yourself and the community. Put them up around town and give them to friends. You can view the flyer for printing here.

Come to the Campus and Patrol

CSU Stanislaus is located in Turlock, CA on Monte Vista Ave (right off Highway 99 on the same exit) and University. Come out to the lovely campus and patrol! Look for Identity Evropa stickers and posters, soak up the free wifi, and enjoy a pizza slice in the cafeteria.

Nathan Damigo likes to park near Crowell Blvd and Ansel Adams Blvd. (free parking) and walk into the campus to the Social Studies Building where his classes take place. This is where the majority of IE posters and stickers were found and a good place to keep on eye on.

Remember: we aren’t here to demand censorship, nor do we rely on the power of the state to stop fascism. We know that the oppressive power structures we live under aren’t on our side, and we know that our own, liberation-minded movements frighten them just as much as any fascist movement that seeks to uphold the foundations of patriarchy, colonialism and white supremacy this system is built upon. In the case of CSU Stanislaus, campus police have long worked in tandem with the administration to keep tabs on student organizers who have taken action over the years against rising fees and tuition. We don’t count on them, we look towards each other.

This is why we are interested in building our capacities for self-defense. This means coming together as people in our communities to fight back against white supremacist and Neo-Nazi organizing. It means building up organizations that can counter, with action and ideas, these movements based around repression and reaction.