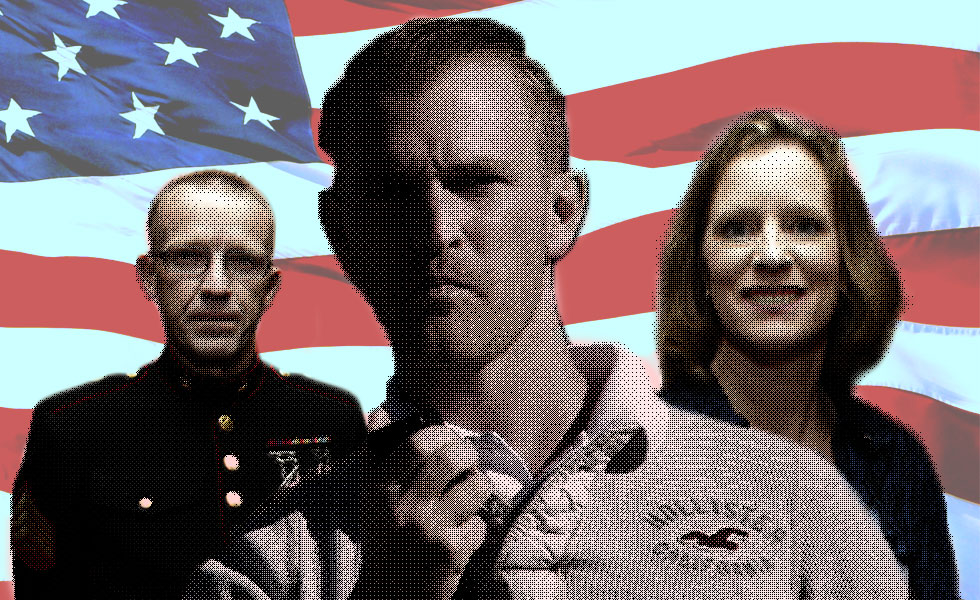 Nathan Damigo’s seemingly meteoric rise to media prominence with his white supremacist activism under the banner of Identity Evropa would not be possible without the emotional and material support of his family before and after his release from prison in 2014. Nathan currently lives with his family on a 5 acre compound in Oakdale, located in Stanislaus county, California. Residents include Nathan’s parents, Mike and Charilyn, as well as his grandparents Benjamin and Charlotte Haley. Nathan has lived at this compound since his release and during the entirety of his involvement in white supremacist activism. He leads the organization primarily out of the compound, and has registered the business entity of Identity Europa, Inc. at this address. 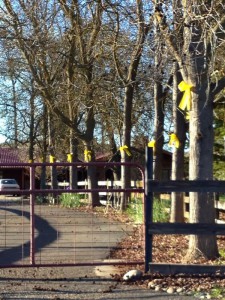 Yellow ribbons welcoming Nathan to the Oakdale compound after his release

The Damigo family embodies the core values of the idyllic white American family: They are devout protestant Christians and many have proudly served in the military and law enforcement. While Nathan Damigo’s white supremacist activism is seen by many as the emergence of a new and aberrant phenomenon, Damigo’s ideology is very much within a continuation and evolution of his and his family’s relationship to the structural white supremacy that underpins every facet of American society. This relationship is one of at least several generations of his family earning a living in law enforcement and the military on the frontlines of dispensing the daily violence and murder necessary for maintaining and expanding the white supremacist capitalist system in the US and its global dominance. 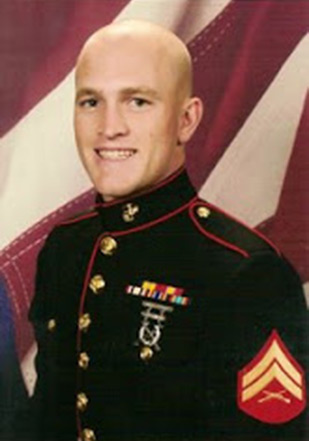 Nathan in his USMC uniform

While the Damigo family, especially his father, held high hopes for Nathan’s military career in the Marine Corps, his 2010 conviction and prison sentence for armed robbery shattered those dreams. Nathan served approximately a combined 5 years behind bars for armed robbery committed in 2007 against Changiz Ezzatyar, a taxi driver in the San Diego area. Nathan targeted him because he thought he “looked Iraqi” and placed a loaded pistol to his head.

During Nathan’s arrest, legal proceedings, and subsequent incarceration, his family, especially his mother Charilyn, devoted themselves to supporting and advocating for him. They began a very vocal and persistent campaign to excuse Nathan’s actions as the result of post-traumatic stress from combat in Iraq and to erase the victim of Nathan’s racist robbery and the harm inflicted against him. The recurring theme in all the family’s efforts is a sense of frustration at the denied entitlement to special treatment for Nathan and the idea that he should not have suffered the consequences for his action because of his service in the military. The family was able to attract the attention of many media outlets and sympathetic military and civilian officials, including the producers of the HBO film Wartorn. Nathan’s story was sympathetically featured in this film, and the Damigos were even invited to attend a screening of the film at the Pentagon. Mike, Charilyn, and Josh Damigo attending a screening of Wartorn at the Pentagon

Most of Nathan’s term was served in an Oklahoma prison where he was moved to due to overpopulation in the California prison system. There, he joined white supremacist prison gangs, and began reading authors like David Duke (a Neo-Nazi, anti-Semite, and former Grand Dragon within the KKK) whom he credits with this racial awakening. Now, prospective Identity Evropa members are encouraged to read the same books by Duke that Damigo did in prison, in the hopes that they too undergo a similar racist conversion. Despite joining up with white power prison groups, it appears that his sentence was mostly uneventful. He was even able to obtain an associate degree with the persistent support and interventions of his mother. Once released on parole, Nathan moved into the Oakdale compound. 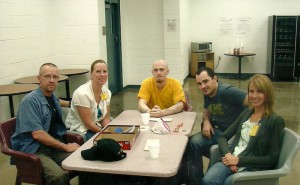 Nathan being visited by the family

Damigo’s father, Michael “Mike” Christopher Damigo (57) is a retired Santa Clara county sheriff’s deputy, former sergeant in the US Marine Corps, and graduate of the conservative Christian Bob Jones University. Mike is not Nathan’s biological father, and adopted him and his older brother, Joshua, when he married their mother and changed their last names from Lodge to Damigo. Nathan has four siblings: His older brother Josh, step-sisters Tiffany and Natalie, and younger brother Tice. The family mostly lived in San Jose, before moving to Oakdale. 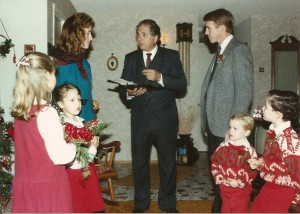 Based on his online writings, Mike took a lot of pride in Nathan’s enlistment and service in the Marines. He had been a prolific contributor to the newsletter of “Sgt. Grit,” a retailer of USMC branded merchandise where his writings mostly concerned Nathan and his deployment in Iraq. These writings which are full of nationalist, militaristic, and religious sentiments, and are very telling of his authoritarian and American exceptionalist mindset. In one of these dispatches, he advises those deployed in Iraq and Afghanistan to “do what you gotta do to come back home” and to “watch out for cameras and lawyers and GET SOME!” Mike’s writings noticeably ceased after the date of Nathan arrest, and the contrast makes his sense of disappointment in Nathan palpable. 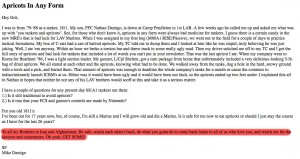 An example of Mike’s writing in the Sgt. Grit newsletter

Mike also has over two decades of history with law enforcement and remains on the Santa Clara county payroll according to Transparent California, where prior to his retirement, his total pay and benefits regularly exceeded $150k annually. In 2010, he shot and killed an undocumented Mexican cannabis farmer in the eastern hills of Santa Clara county. Despite the farmer only being in possession of a pellet gun, the county district attorney cleared him and other officers involved of any wrongdoing. Mike retired in 2015 and receives a pension from the state. Charilyn Damigo (53), Nathan’s mother, can be described as a helicopter parent with her very persistent and involved approach to supporting Nathan during and after his prison sentence. Chief among these efforts was maintaining a now deleted blog about Nathan’s time in prison where she solicited donations and other support. She directly helped Nathan with his course work (including the transcription of his homework over the phone and sending him an Xbox 360 video game console for watching course DVDs), and even helped him pick classes and determine prerequisites once he began enrolling at CSU Stanislaus. She also continued her advocacy for Nathan and was even able to get the dishonorable discharge status reversed for Nathan, so he could be eligible for VA benefits. She was also able to get the San Jose city hall to sponsor a screening of Wartorn with the then mayor Chuck Reed in attendance. 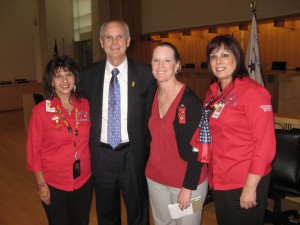 Earlier in Nathan’s life, he was enrolled in the private Liberty Baptist High School in San Jose. Charilyn worked there as a teacher and principal for a number of years. She has a long history of involvement with veterans support organizations. She is the Vice Chairman [sic] of FAVA: Family Alliance for Veterans of America and is the chapter President for Mid-Cal Blue Star Moms.

Nathan’s grandparents, Benjamin (78) and Charlotte Haley (76) are the owners of the compound the family lives on. Benjamin is also a former police sergeant who retired in 1993 and receives a pension of approximately $70k from the state. His son and Nathan’s uncle, Jerel Haley is the chief of police in Atascadero, CA (next to the affluent down to San Luis Obispo) whose total annual pay and benefits regularly exceed $200k. Benjamin has a limited liability corporation named Charben, registered to his address.

Ultimately, it’s clear that Nathan Damigo, as a felon would not be able to lead his organization were it not for the emotional and financial support provided by his family. While the media continues its seemingly compulsive need to give Nathan a platform and to create hype around his activism as something novel, as this writing has detailed, his white supremacist ideology is directly informed by that of his family, protestant religious values, social environment, and institutions he’s been involved with such as the military and law enforcement.

In a time of increasing emboldened activity from the grassroots white supremacist movement and its subset in the Alt-Right of which Nathan belongs, it’s important to broaden our understanding of white supremacy as a systemic and structural feature of the American political system that’s been inseparable from it since its inception. White supremacy is not just the vulgar and explicit calls for radical and genocidal racial stratification that the Alt-Right loosely advocates for, but a power and resource imbalance between those accepted into whiteness and those excluded from it that’s directly woven into the very fabric of how America functions.

The police and military are central to the preservation of white supremacy as they are tasked with violently imposing and protecting this social relationship. From its most significant origins as the the runaway slave patrols, the police has always primarily functioned to defend the property and interests of the wealthy and powerful through the application of violence, and this continues to be the central function of the institution to this day.

It is also ironic that much of Damigo’s life has been so severely impacted by institutions such as law enforcement, the prison industrial complex, and the military, that have also so deeply impacted communities of color. According to Damigo’s worldview now, non-whites genetically are inferior, are more prone to crime, are less intelligent, and Jews also conspire to destroy the “white race.” We wonder if Damigo felt this way about his fellow soldiers that were non-white, many whom joined up because unlike Damigo, they were not from upper-middle class families, but wanted money for college or to support their children. These people fought alongside him in Iraq and some surely died, as did the literally hundreds of thousands of Iraqi civilians which were killed as the war dragged on from it’s start in 2003, to say nothing of the literally millions that have died due to US sanctions and under Saddam while he was a US ally. What of the millions of people that were part of the massive and growing prison system that Nathan was a part of for several years? Was Nathan not supposed to be there, but they were? It’s clear that from viewing the support received by Nathan’s family, they would probably agree. Nathan was a “good” boy from a well off family that was negatively impacted by a war most now don’t support, and in turn, was arrested for a crime that Nathan now says African-Americans and others are genetically pre-determined to carry out.

Furthermore, the growing militant resistance to police violence, incarceration, and murder against black, brown, Native, other people of color, the poor, and mentally disabled, through movements such as Black Lives Matter and other struggles against forms of oppression such as capitalism, patriarchy, imperialism, environmental destruction, and the State have brought alarm to those like Nathan Damigo and his family. They view the privileges and special treatment once afforded to them as a benefit of their social position of whiteness and serving as its diligent armed protectors as eroding and under attack by this emerging militancy and the autonomous movements of oppressed people. In resisting white supremacy, we must go beyond just shutting down the Nathan Damigos of the world, but we must also confront the systemic and structural aspects of this social relationship in all facets of our lives.