Northern California Anti-Racist Action (NoCARA) has been monitoring the white supremacist fraternity Identity Evropa (IE) since 2016. IE has attempted to position itself as the vanguard of the alt-right, and their creator, Nathan Damigo, took his inspiration in part from David Duke of the Ku Klux Klan (KKK) and an updated European fascist politics called “Identitarianism,” which they package together in a millennial hipster aesthetic. After being involved in street fights from Berkeley, CA to Charlottesville, VA in 2017, IE has gone through a number of leadership shake-ups and faces lawsuits for their participation in the Unite the Right rally that resulted in the murder of anti-fascist Heather Heyer. These difficulties ultimately influenced an attempted reboot of the group and rebranding under a different name: American Identity Movement (AmIM). It seems even the neo-Nazis of today are having an identity crisis! Despite the name change, through leaked data published by Unicorn Riot that includes private communications and information on organizational structure and processes, AmIM has been proven to be nothing but a new name and logo from the same group which iconically sceamed, “Jews will not replace us!,” tiki torches in hand.

Last month, Nolan Brewer of Eminence, Indiana was sentenced to three years in prison for committing a hate crime when he vandalized an Indiana synagogue in 2018, painting white supremacist symbols (including a swastika) on the walls of a trash enclosure. Meanwhile Brewer’s wife Kyomi, who also participated in the attack, pled guilty to arson. Brewer revealed to FBI agents that he was a member of Identity Evropa. However, the Brewers are not unique. IE has been associated with other acts of terror as well, such as group member Taylor Wilson who broke into a secure compartment of an Amtrak train to stop it and “save the train from the black people.” In 2016, IE member Gabriel Wilson threatened the president of a college in Kansas who had bi-racial children. Group founder Nathan Damgio, who did time for armed robbery after attacking a cab driver he thought was “Iraqi,” and multiple IE members have also been involved in violent brawls from Berkeley to Minneapolis during 2017.

Identity Evropa/American Identity Movement represents a white nationalist network that contains the potential for serious and lethal racist violence. For this reason, we feel it is necessary to alert Northern California to IE/AmIM members in their communities. Below we will provide research and information on Brodin Lee Sutherland, a prominent and active member of the Northern California IE/AmIM branch. 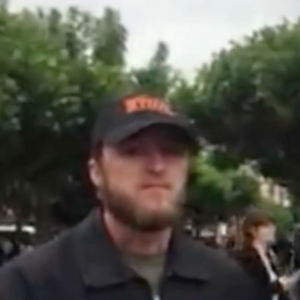 Brodin Sutherland first came to the attention of anti-fascists when he appeared with Nathan Damigo at UC Berkeley in May 2016. We wrote about Nathan Damigo, the Northern California-based founder and first leader of Identity Evropa, back in December 2016. Richard Spencer, the fascist who coined the term “alt-right,” was additionally heavily involved with IE during the group’s early period. Spencer not only announced the event on his Twitter account, but he also accompanied Damigo for the coming out rally of his new white power organization. Later that year, Damigo got permission to lead a rally by himself, an anti-immigrant IE gathering in San Francisco at Pier 14. Sutherland made an appearance at this rally as well, wearing the same distinct hat. 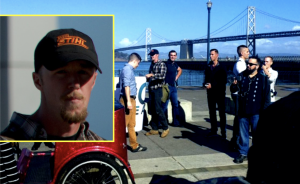 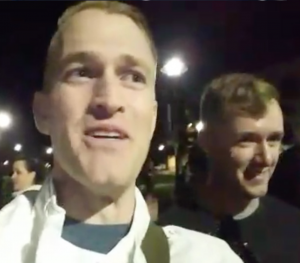 The longer Brodin Sutherland was a member of Identity Evropa, the more active and involved he appeared to become. As the rate of alt-right “free speech” rallies increased throughout 2017, Sutherland attended events across the country, following very closely behind then-IE leader Nathan Damigo. In early 2017, Damigo and Sutherland were joined by a few other local fascists outside of the Milo Yiannopolous event at UC Davis. The event was ultimately shut down by anti-fascists, while Damigo and Martin Shkreli got a tampon and dog feces thrown at their faces, respectively. Sutherland attended the March 4th alt-right rally in Berkeley, which saw some of the first larger scale street fights between anti-fascists and the right wing big tent coalition that was just beginning to gain steam. The alt-right played a prominent part in this growing coalition. Sutherland is seen in several pictures and videos from the March 4 event sticking closely to Kyle Chapman, who would soon become the burnt-out meme “Based Stickman.” 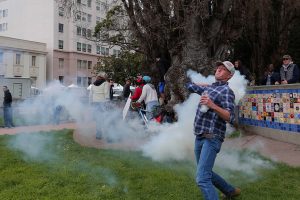 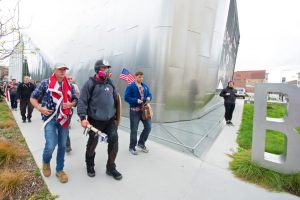 By April 2017 violence was expected at these events, and Identity Evropa was arriving prepared for this outcome. On April 15, 2017 Brodin Sutherland was at another alt-right gathering in Berkeley, this time with Nathan Damigo and other IE members as well as several members of the white nationalist fight group Rise Above Movement (RAM), then called DIY Division. Again, Sutherland is seen in media from the event closely following Damigo, and the two of them appear in photos with RAM taken both during and after the event. IE and RAM stood out as some of the most violent participants. Damigo was captured on video sucker-punching an anti-fascist demonstrator, and members of RAM were leading aggressive attacks throughout the day, including RAM leader Robert Rundo who was arrested for assaulting a Berkeley police officer. Sutherland positioned himself in the thick of the rally, which was marked by mass fights rolling through the streets of downtown Berkeley. Also in April 2017, Sutherland was one of a small group of IE members that held a flash rally in New York similar to the San Francisco rally in late 2016. 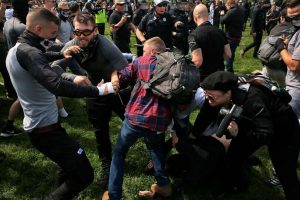 Brodin Sutherland (center, red shirt and jeans) assisting the neo-Nazi members of Rise Above Movement as they attack protesters in Berkeley, CA April 15, 2017 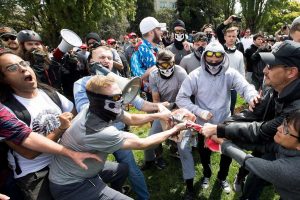 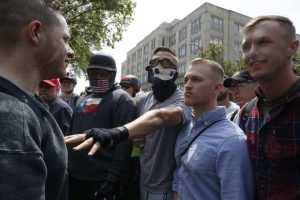 On August 12, 2017 Brodin Sutherland attended the Unite the Right rally in Charlottesville, VA with Identity Evropa and hundreds of other racists, white nationalists, and neo-Nazis. While the police created conditions that stopped the alt-right’s rally from actually happening, violence erupted in the streets and eventually resulted in the murder of Heather Heyer by white power terrorist James Alex Fields Jr. Sutherland was also present at the August 11th torch rally the night before on the University of Virginia campus, where white nationalist marchers chanted “Jews will not replace us!”

Brodin Sutherland and other alt-right activists pushing back against the police in Charlottesville August 12, 2017

Despite the post-UtR fallout after August 12, the Bay Area saw one last large far-right rally that brought together a coalition of right wingers, from mainstream conservatives to authoritarians and fascists, in San Francisco. Brodin Sutherland attended the rally, organized to “honor” Kate Steinle (against the wishes of her family) and amplify anti-immigrant sentiments on December 16, 2017. Sutherland arrived with a crew of Identity Evropa members that spent a considerable amount of time at the event with Patrick Little, a Hitler fanboy and candidate for U.S. Senate in 2018 based in Albany, CA. The rally was organized by Lindsay Grathwohl, a far-right organizer who we previously exposed as having connections to the Golden State Skinheads gang.

Brodin Sutherland is not just associated with Identity Evropa/American Identity Movement. Aside from connections to figures such as Patrick Little and Rise Above Movement outlined above, Sutherland has also revealed affinity with Asatru Folk Assembly. Asatru is a white nationalist distortion of pagan religion that accepts only white people exclusively. The Asatru network has also been associated with terroristic violence such as the Christchurch mosque shootings. The SF Bay View originally reported in 2017 that Sutherland donated $500 to former KKK Grand Wizard David Duke’s 2016 U.S. Senate campaign. He also gave money to Donald Trump’s campaign for President. 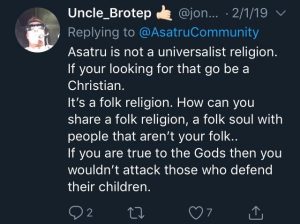 There have been several social media accounts connected to Brodin Sutherland, especially on Twitter. His accounts tend to get suspended quite quickly because of the hateful content on them. The handle “unclebro1488” was one of the accounts that belonged to Sutherland. The numbers 14 and 88 are commonly used among neo-Nazis as a shorthand to signify their political affiliation. The combination 1488 refers to the “14 words,” a white supremacist slogan coined by a member of the white supremacist terrorist group from the 1980s, ‘The Order,’ and pays lip service to the non-existent threat of “white genocide,” and “88” meaning “Heil Hitler” (H being the eighth letter of the alphabet). The outward “1488” affiliation is significant also in that Identity Evropa and its members have consistently denied any association to neo-Nazis, but it doesn’t take much digging to find the truth. 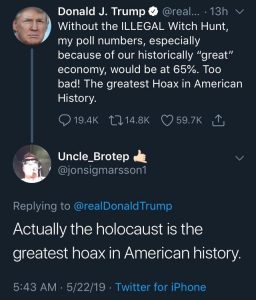 Brodin Sutherland’s father Leland “Lee” works for Contra Costa County Sanitary District as a Mechanical Supervisor. Lee Sutherland donated $127 to Ted Cruz’s presidential campaign in 2016. Brodin has owned multiple businesses with his brother Talon including Fire House Hauling and A Greener World Hauling. Talon James Sutherland has worked as a firefighter and as a police officer with Oakland PD before moving to the Rio Vista PD in 2015. On social media, Brodin has claimed to be a veteran, though further research is needed there. Campaign contribution files say he worked as a solar installer at the time. 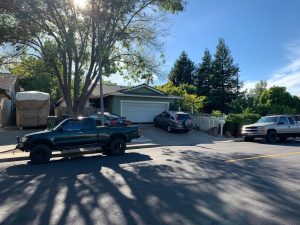 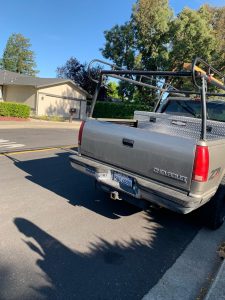 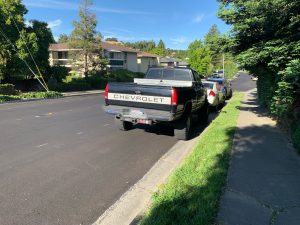 If you have any information on Brodin Sutherland, Identity Evropa/American Identity Movement, or other white nationalists in Northern California, you can reach us at nocara @ riseup.net 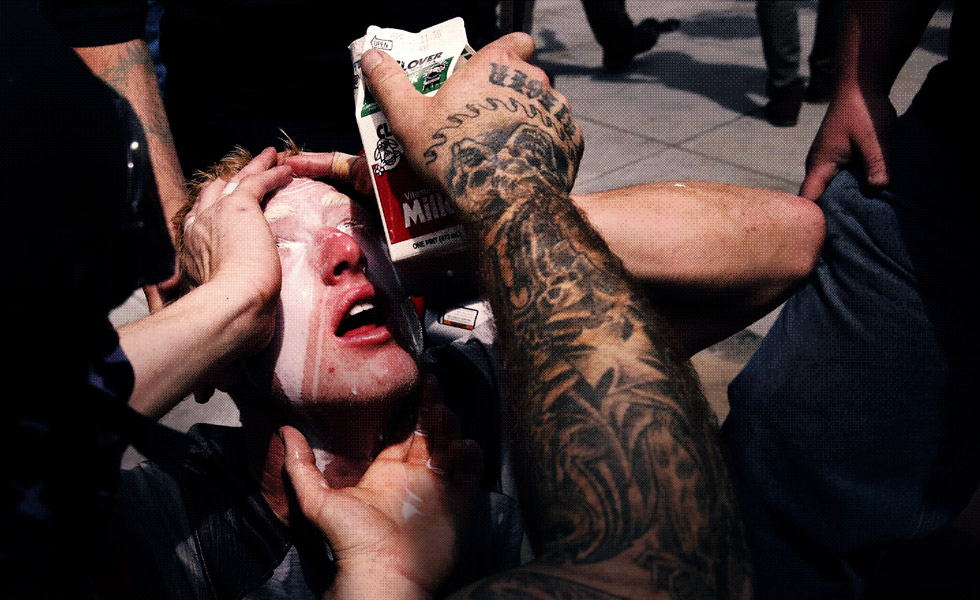 On October 2nd, as has been widely reported in the media, four members of the violent neo-Nazi gang known as Rise Above Movement (earlier known as DIY Division) were arrested and are now facing federal rioting charges that could land them behind bars for years if convicted. The criminal complaint brought against members of RAM by the FBI references and quotes the work of Northern California Anti-Racist Action (NoCARA) on RAM which was published in July 2017. In light of this development, we believe it’s important to examine and clarify a number of important points relating to RAM, the FBI, state repression, and anti-fascist research and organizing. END_OF_DOCUMENT_TOKEN_TO_BE_REPLACED

In the face of this reality, Alt-Right trolls and ‘journalists,’ their friends at mainstream outlets like Fox, and the Trump administration itself, have all been quick to jump on anything that reeks of “left-wing” violence as a means of distracting and mobilizing their base. From Kyle Chapman trying to connect James Hodgkinson to the antifascist movement, to the New Jersey Department of Homeland Security labeling antifa a “terrorist threat to the wider public,” both the State and the Right are attempting to overshadow their own growing violence by playing up fears of resistance from below.  END_OF_DOCUMENT_TOKEN_TO_BE_REPLACED